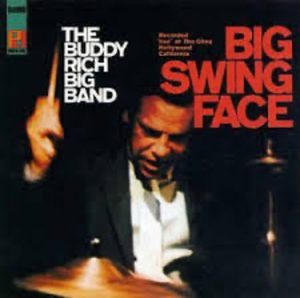 While he kept busy, Buddy Rich’s career was a bit aimless in the 1950s and early ‘60s. At one point, he thought about giving up the drums altogether and just working as a singer (recording three vocal albums) but he was no Mel Tormé and his vocal records did not sell that well. Rich enjoyed playing with Harry James and he was back with the trumpeter’s orchestra during 1962-66 where he was one of the highest paid sidemen in the world and well featured. But playing the same James hits every night must have bored him after a while.

Rich always wanted to lead a successful big band of his own and, later in 1966, he decided that it was time. The mid-1960s was not a logical period for someone to try to put together their own jazz orchestra, but innovators do not follow trends and this time Rich’s timing was right. The Buddy Rich Big Band was a surprise success.

Swingin’ New Big Band  (the CD reissue adds nine “new” selections to the original eight-song program) has arrangements by Oliver Nelson, Bill Holman, Phil Wilson, and others for Rich’s 17-piece band. Tenor-saxophonist Jay Corre, altoist Pete Yellin, trumpeter Don Rader, and pianist John Bunch are among the key soloists with colorful versions of “Sister Sadie,” “What’d I Say,” and “Hoe Down” being among the highlights.

Best of all is the classic “West Side Story Medley” which has an outstanding Rich solo. That Bill Reddie chart would become a permanent part of the Buddy Rich’s big band library.

Plenty has been written about Buddy Rich’s personality. His reasoning was that he practically killed himself during every performance so his sidemen should always do the same. When he felt that they fell short, he would let them know. Rich alternated kindness with temper tantrums. His star sidemen (such as Ernie Watts, Richie Cole, and Bill Cunliffe) always said that they were treated well, but some of his less important section players, particularly those who questioned his authority, did not fare so well. He drove them relentlessly and they ended up either exceeding their potential or wilting under the pressure.

Although Buddy Rich was never shy to express his disdain for rock, he was open to utilizing rock and funk rhythms at times (as if to show the younger players how to do it right) and performing the better pop tunes of the time in addition to more swinging charts.

Big Swing Face, which is greatly expanded in the CD version, features the Buddy Rich Orchestra performing live in 1967. Among the more memorable selections are “Norwegian Wood,” “Love For Sale,” “Mexicali Nose,” and “Bugle Call Rag” with Rich’s young daughter Cathy Rich singing “The Beat Goes On.”  Ernie Watts (on alto), Jay Corre and trumpeter Bobby Shew are among the solo stars in addition to the leader.

Of all the recordings by the Buddy Rich Big Band, this is the most essential one. Performing at Caesar’s Palace in Las Vegas on July 7, 1968, the band romps through “Mercy, Mercy, Mercy,” altoist Art Pepper (who was having a brief early comeback) is featured on “Alfie” and “Chelsea Bridge” (the latter is one of three numbers added to the CD reissue), and tenor-saxophonist Don Menza is a powerhouse throughout.

“Channel One Suite” is a classic, a multi-sectioned arrangement by Bill Reddie that gives Menza a chance to take an unaccompanied solo (displaying some circular breathing) before Rich creates a dazzling and memorable solo, one of his greatest on record. Even though one cannot see him, his playing will stick in one’s mind afterwards.

The Buddy Rich big band recorded many albums during 1967-75 including The New One, Buddy & Soul, Keep The Customer Satisfied, and A Different Drummer. Rich In London, recorded at Ronnie Scott’s in 1971 is a standout partly due to the superior playing of tenor-saxophonist Pat LaBarbera and such number as “Dancing Men,” “Two Bass Hit” and “Time Being.” A special highlight is “Buddy Rich Speaks,” a spontaneous monologue by Rich that is quite funny.

While Buddy Rich broke up his big band a few times and recorded a few small group albums including with Lionel Hampton and Zoot Sims, he loved having his own orchestra and would invariably form a new big band shortly after the previous one ended.

1977’s Plays and Plays and Plays is most notable for featuring tenors Steve Marcus and Bob Mintzer. Marcus would be with Rich until the end and would be regularly enlisted whenever a Buddy Rich ghost band was organized. Highlights of this set include the swinging “Ya Gotta Try,” Marcus on “‘Round Midnight,” Don Menza’s “Time Out,” and the well-titled “Party Time.”

Class Of ’78  has relatively brief playing time but what is included is quite fun including a big band rendition of “Birdland,” the boppish “Bouncin’ With Bud,” Horace Silver’s “Cape Verdean Blues,” and Chick Corea’s “La Fiesta.” Marcus and fellow tenor Gary Bribek get quite heated on “Funk City Ola.”

Buddy Rich continued playing and leading his big band up until the end of his life which came on April 2, 1987 at the age of 69. Live On King Street, originally a three-Lp set that came back as a two-CD reissue, does an excellent job of summing up the legacy of the Buddy Rich Big Band.

Recorded April 3, 1985, the “names” in the band at the time were Steve Marcus, pianist Bill Cunliffe, and bassist Dave Carpenter, but the ensembles have a strong group spirit and the soloists are all excellent. There are remakes of “Norwegian Wood,” “Love For Sale,” “Channel One Suite,” and the “West Side Story Medley” plus such swingers as “One O’Clock Jump,” “Cotton Tail” and “New Blues.”

Buddy Rich sounds enthusiastic and typically virtuosic as he once again provides evidence that he may very well have been “the world’s greatest drummer.” 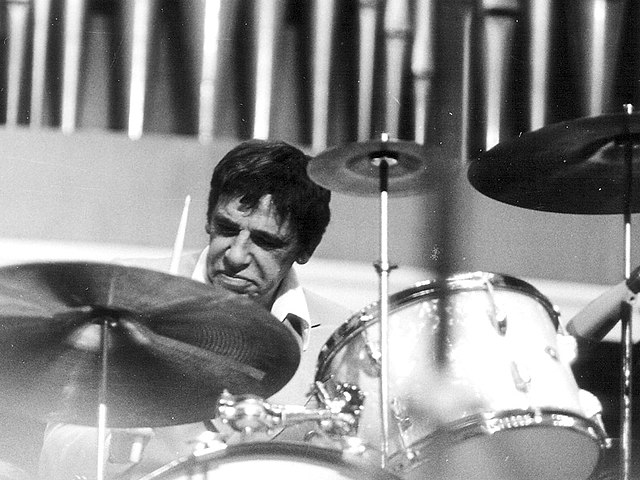 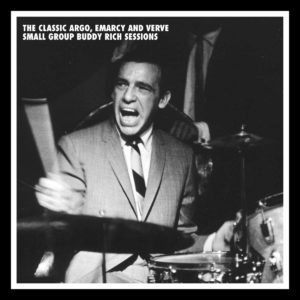