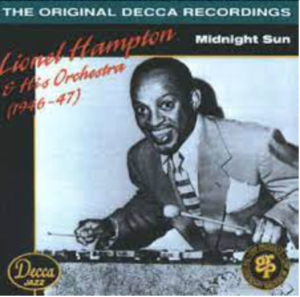 Hamp is a two-CD set that does a fine job of summing up Lionel Hampton’s big band recordings for Decca during 1942-50 plus two songs from 1963. It includes the hit recording of “Flying Home,” the original versions of “Hamp’s Boogie Woogie,” and “Hey Ba-Ba-Re-Bop” and the vibist’s most famous composition, “Midnight Sun.” The twofer also has Dinah Washington singing “Evil Gal Blues” and “Blow Top Blues,” Dizzy Gillespie sitting in with the band during a 1945 Carnegie Hall performance of “Red Cross,” an extended version of “Rockin’ In Rhythm,” Charles Mingus’ futuristic “Mingus Fingers,” “Three Minutes On 52nd Street,” “Red Top,” and “I Wish I Knew” (featuring Little Jimmy Scott). A special highpoint is Hampton’s famous and lengthy version of “Stardust” from a Just Jazz concert on Aug. 4, 1947 in which he follows the solos of trumpeter Charlie Shavers and altoist Willie Smith with a particularly inspired improvisation.

Midnight Sun is a single-CD that concentrates on Hampton’s 1946-47 recordings. While it duplicates a few selections from Hamp, it also contains other numbers that were bypassed including “a two-part “Airmail Special,’ “Cobb’s Idea,” and “Hamp’s Got A Duke.”

Lionel Hampton loved few things more than jamming with his fellow greats. While his big band was a nightly thrill for him, his best small-group sessions were often more challenging and inspiring. The five-CD Verve set with pianist Oscar Peterson dates from 1953-54 and has Hampton and Peterson performing in a quartet/quintet with bassist Ray Brown and drummer Buddy Rich, plus clarinetist Buddy DeFranco on one CD and guitarist Herb Ellis on the later sessions. Despite the large quantity, the music is consistently enjoyable with the DeFranco disc being particularly heated.

On Aug. 1, 1955, producer Norman Granz teamed Hampton with Stan Getz. They were both available in Hollywood since they were appearing in The Benny Goodman Story. While they perform a ballad medley and “Louise,” it is their fiery and even ferocious versions of “Cherokee” and “Jumpin’ At The Woodside” that take honors. They battle each other at the rapid tempos and are quite competitive. Despite this album’s success, Hampton and Getz never recorded together again.

You Better Know It (Impulse)

While Lionel Hampton recorded fairly regularly during his last decades, most of his sets as a leader, whether for larger companies or his Glad Hamp and Who’s Who labels, promised more than they delivered and do not add much new to his legacy. However these two CDs are on a higher level.

You Better Know It from 1964 is a bit of a throwback to Hampton’s classic small-group swing dates of the 1930s. Joined by flugel hornist Clark Terry, tenor-saxophonist Ben Webster, pianist Hank Jones, bassist Milt Hinton, and drummer Osie Johnson, the leader is in top form on such numbers as “Vibraphone Blues,” “Tempo’s Birthday,” “Sweethearts On Parade,” and “Pick A Rib”

While the CD reissue of Reunion At Newport adds five numbers from Jazz Flamenco, an interesting Hampton big band date from 1956 recorded in Spain with a 12-piece group that included a castanets player plus guest pianist Tete Montoliu on two quintet numbers, the bulk of the CD is taken from the Newport Jazz Festival. The July 3, 1967 concert has Hampton leading an all-star alumni big band on some newer material and climaxing with spirited versions of his hits “Hey Ba-Ba-Re-Bop,” “Hamp’s Boogie Woogie,” and “Flying Home.”

This rendition of “Flying Home” has Illinois Jacquet sitting in with the band and blowing the roof off. It is just what one would expect from a Lionel Hampton performance: swing, fire and excitement. 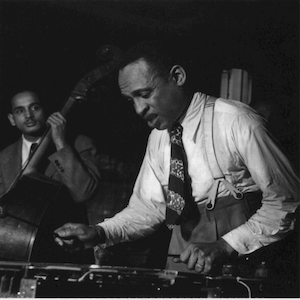 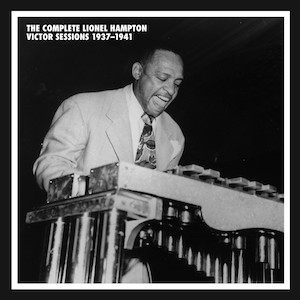 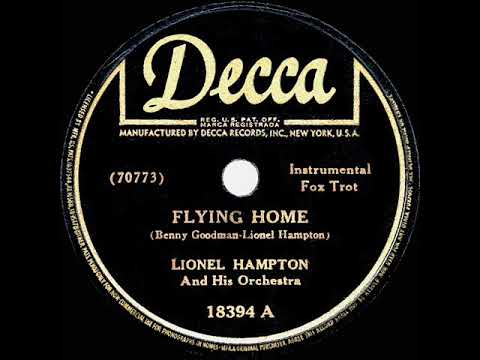