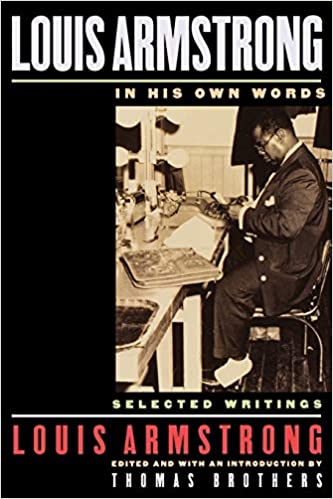 Louis Armstrong in His Own Words

“Joe Oliver has always been my inspiration and my idol. No trumpet player had the fire that Oliver had. Man, he really could punch a number. Some might have had a better tone, but I’ve never seen nothing have the fire, and no one created as much as Joe.” – Louis Armstrong

“Writing was never an incidental activity for Louis Armstrong, but something he did almost every day—a literary counterpoint in letters, notes, memoirs, and annotations. He was a wonderful writer, vivid and candid, but until now his most personal reflections were known only to researchers. Thomas Brothers has superbly collected them in an entertaining volume that will prove indispensable to anyone who wants to understand the genius who transformed American music” – Gary Giddins

The way I see it, the greatest musical creations came from Joe Oliver’s horn— and I’ve heard a lot of them play. I think he was better than Bolden, better than Bunk Johnson. Buddy blew too hard—he actually did blow his brains out. Even Bunk didn’t offer nothing but tone. He didn’t have the get-up-and-go that Oliver did; he didn’t create a phrase that stays with you.

But Joe Oliver created things—and they weren’t skullbusters, either. There’s your ‘ ‘Dippermouth”; all your trumpet players just aren’t going to sound good unless they put that solo of his in it. And things that five-part brass sections play today, his horn played first—even if they don’t give him the credit.

I could listen to them all day
I was very young when I first heard Joe Oliver. He was in the Onward Band, a brass band they had down there in New Orleans—a good brass band. About twelve pieces: with three trumpets and three cornets. Joe was playing cornet at the time. Two of them would play lead; there was Joe and Manny Perez. I used to second line behind them. When Joe would get through playing I’d carry his horn. I guess I was about 14. Joe gave me cornet lessons, and when I was a kid I ran errands for his wife.

I could stay at the parade and listen to them blow all day. They just knocked me out. They’d come along with blue serge coats, white pants, and band hats—Joe would have cream-colored pants. I remember those hot days, and the hot sun. Joe would have a handkerchief on his head, and put his cap on top of it, with the handkerchief covering the back of his neck to keep the sun off him while he’s blowing. All the cats would be blowing, even the second line.

I wouldn’t change that solo
They’d play ‘Panama’, or something like that, and the second line would applaud and Joe was really blowing—he’d go way up there, you know, like on that last chorus of ‘High Society.’ If you’ve ever heard us play it, that’s Joe Oliver up and down, note for note. I wouldn’t change that solo; I see to it that I hit those same notes in my mind, because that’s the way he’d end up those brass band solos.

Joe led the Magnolia Band at one time. And he and Kid Ory got together and made a grand band. With this brass band, that kept him in two bands—he really was King there. Bunk was as big a name as Joe then and I guess Bunk had a better tone than Joe but there never was a trumpet playing in New Orleans that had the fire that Joe Oliver had. Fire—that’s the life of music, that’s the way it should be. – Louis Armstrong