"I believe that Paul Desmond shares with Benny Carter the title of most lyrical altoist. He is a profoundly beautiful player" - Julian Adderley

Paul Desmond pursued his own musical ideal, and his distinctive sound — light, liquid, at times mournful — and is an important voice in jazz.

Dave Brubeck on Paul Desmond
“I’ve heard him play more than anyone else has and even after all these years, he still surprises me. There are so many imitators of Charlie Parker, and to me Paul is one of the few true individuals on his instrument. Jazz Musicians will put one idol before them and think that everything should revolve around this person and that everyone should play his way — and this curbs individuality. Paul’s big contribution is going to be that he didn’t copy Charlie Parker.

I believe that Paul and I make a good team. We’ve had many conflicts and we will probably have many more, but there are a lot of things we haven’t done yet and can do if we can stick together and put up with each other.”

Yet even though Paul Desmond finds his association with Dave so satisfying (and vice versa) there are constant, if subtle, pressures on the altoist to strike out on his own. Desmond has made notably few recordings with anyone but Brubeck, leading many musicians to wonder how he would sound in another context.

Of those few discs Paul Desmond has made with others (Gerry Mulligan, Don Elliott), his favorite is one made for the Warner Bros. label. Working with him were Percy Heath, Connie Kay, and Jim Hall. Though suspicions are occasionally voiced that anyone who has been a sideman for 10 years would run into difficulty as leader, guitarist Hall’s comments on the date would tend to indicate the contrary.

Jim Hall on Paul Desmond
“I learned a lot about Paul due to the fact that each of us had to give a high-level performance at the same time as the other fellow. I was very impressed with his musicianship, especially his ability to play a long melody line through a series of choruses. We made several takes, and every one of his takes was almost perfect; we were the ones who messed up.

But aside from the music, he’s such a charming guy, and though he may not be forceful in the same way some musicians are, I know that he knows what he wants from a group He may not stomp and shout, but he gets things done just the same.”

Nancy (With The Laughing Face)

Paul Desmond’s quartet albums with guitarist Jim Hall and drummer Connie Kay reflect his genius in its most perfect setting. Lighter in weight than the Brubeck quartet, the alto saxophonist’s warm, lyrical solos are the main focus. This 1963 album includes several Desmond originals (including a sequel to his “Take Five”), two Luis Bonfa melodies and three standards. His version of “Nancy (With The Laughing Face)”, written by Phil Silvers on the occasion of Nancy Sinatra’s birth is a masterpiece.

Paul Desmond on Paul Desmond
“I love the way Miles plays, he said. I still think the hardest thing of all to do is to come up with things that are simple, melodic, and yet new. Until fairly recently, most of the landmarks in jazz history could be written out and played by practically anybody after they had been done. It just took a long time for them to be thought of. There’s a lot more going on now in terms of complexity, but it’s still a long time between steps.

Complexity can get to be a trap, too. I think it gets to be more fun to play than to listen to. You can have a ball developing a phrase, inverting it, playing it in different keys and times and all. But it’s really more introspective than communicative. Like a crossword puzzle compared to a poem.

What would kill me the most on the jazz scene these days would be for everybody to go off in a corner and sound like himself. Let a hundred flowers bloom. Diversitysville. There’s enough conformity in the rest of this country without having it prevail in jazz too.

I should mention in connection with anything critical I say about anyone else that about 80 percent of the things I play I hate to listen to afterwards. I kind of know what I’d like to be doing ultimately on the horn, but it’s hard to make any progress while you’re traveling. Hard enough even in one place, as far as that goes.

But the things I’m after musically are clarity, emotional communication on a not-too-obvious level, the kind of form in a chorus that doesn’t hit you over the head but is there if you look for it, humor, and construction that sounds logical in an unexpected way.

That and a good, dependable high F-sharp and I’ll be happy.” – liner note excerpts Mosaic Records The Complete Recordings of the Paul Desmond Quartet with Jim Hall

Two Of A Mind (Bluebird)

In 1951 Paul Desmond joined the Dave Brubeck Quartet, becoming an integral part of the group for the next 16 years. His light tone and sometimes-whimsical style were a perfect contrast for Brubeck’s percussive piano, and he was a major factor in the group’s artistic and commercial success. To hear Paul Desmond at his best with Brubeck, listen to his long solo on the themeless blues “Balcony Rock” from Brubeck’s Jazz Goes To College. Paul Desmond’s solo is absolutely perfect, with phrases being repeated until they become other ideas during an improvisation with a remarkable flow; every note fits even though they were improvised on the spot. Paul Desmond, who composed “Take Five” in 1959, was with Brubeck every step of the way until the quartet broke up in 1967.

While the great majority of Paul Desmond’s recordings were made with Brubeck, he recorded occasional albums of his own. The Original Jazz Classics CD reissues his first two records as a leader. Paul Desmond is featured on a few classical-oriented originals in a quintet with trumpeter Dick Collins and tenor-saxophonist Dave van Kriedt and on some easy-listening numbers with a rhythm section and the Bill Bates Singers in 1954. A much more swinging quartet set from 1956 is also included with Paul Desmond’s being teamed with Don Elliott on mellophone and trumpet, playing such numbers as “Let’s Get Away From It All,” “Line For Lyons,” and “Look For The Silver Lining.” There is no piano on any of these dates. In fact, Paul Desmond would not record with a pianist or keyboardist on any of his own albums until 1968.

Particular delights from the 1950s are the two albums that Paul Desmond shared with baritonist, Gerry Mulligan. The two jazz artists brought out the best in each other, engaging in counterpoint, lively tradeoffs, and witty statements. 1957’s Blues In Time (which has one song that was named “Battle Hymn Of The Republican”) was released under Mulligan’s name while Paul Desmond was considered the leader on Two Of A Mind in 1962 (which has a song listed as “Blight Of The Fumble Bee”). Both quartet albums are equally rewarding and fun.

Glad To Be Unhappy (RCA Victor)

Paul Desmond loved playing with guitarist Jim Hall. Hall’s harmonically sophisticated solos were often inspiring, he knew how to accompany a melodic soloist, and he was a quiet and subtle player. Paul Desmond always preferred support that was low in volume.

Paul Desmond and Hall recorded five quartet albums during 1959-65 in which they were joined by drummer Connie Kay, and either Percy Heath, George Duvivier, Gene Cherico or Eugene Wright on bass. All of their quartet collaborations are on the six-Lp Mosaic box set, but since that definitive reissue will be difficult to locate, listeners may want to search for the individual CDs.

First Place Again (which has also been issued as East Of The Sun) is an excellent place to start. The 1959 set has Paul Desmond playing some of his favorite songs including “East Of The Sun,” “For All We Know,” and “You Go To My Head.” The other four quartet albums (Take Ten, Bossa Antigua, Glad To Be Unhappy, and Easy Living) were recorded at overlapping sessions for RCA Victor during 1963-65 and are equally rewarding. They have Paul Desmond and Hall performing bossa novas, jazz standards, originals (including Paul Desmond’s “Take Ten” which is a relative of “Take Five”), ballads, and a few then-current Broadway songs.

Desmond Blue from 1961 (which is not on the Mosaic box) is a bit different for, although it features Paul Desmond and Hall, they are joined on various tracks by woodwinds, strings, and a harp. But even with the extra instruments, the magical interplay between the two and Paul Desmond’s lyrical style shine through on such numbers as “I’ve Got You Under My Skin,” “Like Someone In Love,” and “I Should Care.”

From The Hot Afternoon (A&M)

After the breakup of the Dave Brubeck Quartet, Paul Desmond took some time off before emerging as a reluctant bandleader. He recorded three albums for the A& M label during 1968-69 which feature him backed by large groups arranged by Don Sebesky. Summertime is the most rewarding of the trio with its highpoints including “Samba With some Barbecue” (“Struttin’ With Some Barbecue” with bossa-nova rhythms), a beautiful rendition of “Emily,” and “Autumn Leaves.” From The Hot Afternoon finds Paul Desmond being joined by strings and Brazilian rhythms while on Bridge Over Troubled Water, he performs a set of Simon & Garfunkel songs. The results of the latter project are better than expected if not classic.

A more logical project took place on Christmas day 1971 when Paul Desmond was teamed at a Town Hall concert with the Modern Jazz Quartet. Not too surprisingly, it worked out quite well particularly the quintet’s versions of “You Go To My Head,” “Blue Dove,” and “East Of The Sun.”

Paul Desmond began having reunions with Dave Brubeck in 1972, sometimes performing in a quintet that also included Gerry Mulligan and on other occasions playing with Brubeck and his sons in Two Generations of Brubeck. He also joined the roster of Creed Taylor’s CTI label. Skylark has Paul Desmond in excellent form in late-1973, playing with a rhythm section that includes guitarist Gabor Szabo and keyboardist Bob James. He fares particularly well on his “Take Ten,” “Skylark,” and “Indian Summer.”

1974’s Pure Desmond is even better, a quartet session with guitarist Ed Bickert, bassist Ron Carter, and drummer Connie Kay. Paul Desmond sounds beautiful and happily inspired on ten standards including “Squeeze Me,” “I’m Old Fashioned,” “Mean To Me,” and “’Till The Clouds Roll By.” 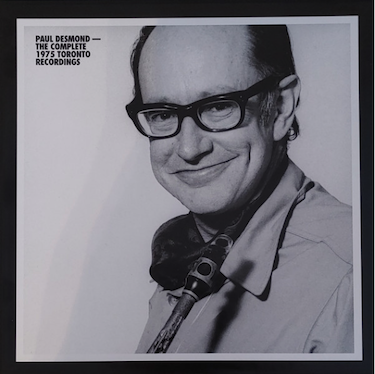