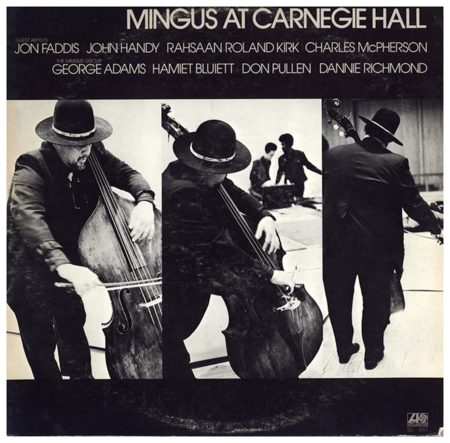 In 1970-71, I was doing a morning talk show on WPLJ in New York, Art Weiner and Julie Lokin, who were publicists at MGM Films and pitched me to book guests on my show. They shared my love of jazz and became fast friends. Toward the end of 1971, they decided to leave the film business and try their hand at producing jazz concerts under the banner New Audiences.

Their first production was presenting Charles Mingus at Lincoln Center’s Philharmonic Hall on February 4, 1972. As the date approached, they became nervous about slow ticket sales and escalating costs. At an emergency financial meeting in my apartment, I urged them to hope for breaking even and look for a new career.

Then Columbia Records, Mingus’s label at the time, decided to expand the scope of the concert, contribute to talent costs and record the concert. The night was a sell-out and New Audiences was on its way. I was never so happy to be so wrong.

In 1973, Mingus made “Mingus Moves” for Atlantic Records with a new band that included a returning Dannie Richmond after a two-year absence and newcomers George Adams and Don Pullen. Dannie had been Mingus’s drummer since 1957 and the empathy and telepathy that they shared were unmatched. Like Jaki Bysrd before him, Don Pullen had an exciting style and the entire history of jazz piano under his fingers. George Adams possessed the same range and technical mastery on the tenor saxophone. They brought new blood to Mingus’s music.

By that time, I was a staff producer at Atlantic and got a call from New Audiences detailing plans of a January 19, 1974 Mingus concert at Carnegie Hall and asking why Mingus was taking a low-budget recording deal for it from Mercury Records. I immediately went Nesuhi Ertegun about the situation. He pounded his desk and said, “Mingus has a lifetime deal here. Doesn’t he know that?” The second half of the concert with added all-stars was released later that year on the Atlantic label where it belonged.

This 75-minute set is a killer by any standards by one of Mingus’s best working bands. Its spirit later lived on for years as the Don Pullen-George Adams Quartet with Cameron Brown and Dannie Richmond (1979-87)

Charles Mingus was a visionary as a bassist, a composer, an arranger and a band leader. All those talents are on full display on this concert from 1974. It was worth the wait to finally have the complete evening available for all to hear.  – Michael Cuscuna, liner note excerpt