"Lester’s style was light, and as I said, it took him maybe five choruses to warm up. But then he would really blow; then you couldn’t handle him in a cutting session." -Mary Lou Williams

“It was like the horn only became a transmitter through which the soul of Lester Young was expressed…When he’d still be up to play I would look around, and people would slow down so they could listen, because everybody realized then, even the people who didn’t really pay that close attention to details as far as the music was concerned, everybody seemed to sense that they were witnessing one of the greatest musicians of all time.

It was like he was a minister and we were his congregation out there. He was speaking words of wisdom to us, and very prophetic, because, his style, what he was doing then, changed the whole concept of tenor playing…it was like listening to a saxophone with the sound of a flute with that clear just mellow, rich, round sound.” – Thad Jones

By Loren Schoenberg
In the rarified precincts of the jazz pantheon, Lester Young is unique in that the true essence of his genius remains obscure. Louis Armstrong, Thelonious Monk, Art Tatum, John Coltrane and the others recorded prolifically in the studio and out of it, etching a relatively complete picture of their abilities. To be sure, there were extraordinary moments that vanished the moment they were created, lingering only in the memories of those lucky enough to have witnessed them.

But with Lester Young, the overwhelming consensus of those who heard him when he was young is that he could and frequently did play extended solos, and that it was only in that form that he could express his unique and large range of musical architecture. So we are left to parse, ever so minutely, the shards of that vision as they are to be found on the studio recordings.

“All jazz soloists up through the advent of long-playing records in the ‘50s had to learn to express themselves succinctly and no one did it any better than Lester Young at his best.”

When Count Basie landed an engagement at Sam Baker’s hotel in Little Rock, Arkansas early in 1934, Herschel Evans switched places with Young so he could stay in Kansas City. And it was during that engagement that Young received the legendary offer from Henderson to take Hawkins’ chair.

Lester Young played an active role in this. He gave a friend, George Dixon, from Earl Hines’s New York bound band, a letter for Henderson, stating his willingness to come to New York immediately if needed. Young’s replacement in Little Rock was Buddy Tate, who was to inherit Evans’ spot in the later Basie band. Most significantly, it was during this period that Young began playing with Count Basie, Walter Page and Jo Jones.

The result of all those nights and the millions of quarter notes that passed between them would bear fruit when they finally recorded together on the legendary Jones-Smith recordings of November 1936.

Lester Young’s first recordings took place when he was 27 years old, with a long and varied career already behind him. The great majority of his peers began recording in their early twenties and some in their teens, which makes tracing their stylistic evolution much easier:

What for us is the very beginning of his oeuvre are at the same time several steps into his own mature evolution. To fully appreciate the specifics of Lester Young’s contribution to this now classic recording session, we must set it within the larger context of the entire quintet, hence the following broad analysis.

The first thing to keep in mind as you listen to the selection is that nothing like them had ever been heard before. The rhythm section communicated in a unified fashion and presented a synergistic beat that is without precedent. And in the young Lester Young there can be heard the reinvention of the tenor saxophone as well the first recorded examples of a new vocabulary for jazz.

Count Basie was a master of stride piano, which demanded equal command of the left and right hands and the ability to summon from the piano the same propelling beat associated with larger ensembles. It was during his years with the Bennie Moten band that Basie first glimpsed the possibility of a spare approach to the instrument.

Moten himself was an accomplished pianist and the two venues, with just one piano, Moten would play the bass part, leaving the treble to Basie. Some of his fellow band mates later identified this as the beginning of the famously sparse Basie style, which came to fruition with his own band a few years later.

Count Basie starts the issued version of Shoe Shine Boy with a brilliant opening gambit that contains more than a dollop of rhythmic, harmonic and formal ambiguity. The idiom is distinctly Walleresque. What seems to be a statement of the melody turns out to be a 16-bar introduction and, as Walter Page (with walking bass lines) and then Jo Jones (with shimmering hi-hat work) settle in, Basie gradually jettisons the striding left hand figures for a far leaner accompaniment. Here is the genesis of the contemporary jazz piano style.

Over the years, Basie’s tinkling style eclipsed the strongly linear and melodic playing heard here. Jo Jones frequently talked about this rhythm section’s penchant for rehearsing, and there are many subtle touches throughout these recordings that provide the sort of convergences of phrase that only happen in truly unified ensembles. The sprung rhythms in Basie’s left hand during the bridge lead to the descending whole-tone run that later became a trademark of one his greatest disciples, Thelonious Monk.

This is immediately followed by the very first recorded Lester Young solo (if this was indeed the first of the two versions made that day), one of his most tightly constructed compositions. Building around a three-note cell of E-Eb-D (all notes referred to are in Bb tenor saxophone key), Young unleashes two 32-bar choruses of untrammeled cohesion.

He telegraphs a feeling of restraint and rhythmic repose, but places himself squarely on top of the beat. Young uses repetition to good advantage to air out his more complex phrases, and there are echoes of his early days as a drummer, especially in the second eight bars of his second chorus.

“Lester… had this remarkable ability to transmit beauty from within him to the rhythm section… He would play some lines that were so relaxed that, even at a swift tempo, the rhythm section would relax.”.  – Oscar Peterson

A subtle touch is the way the rhythm section catches his accents during his bridges, all of which revolve around anticipated beats. The first one finds Jones landing flatly on the downbeat, and on the beat accent he repeats two measures later, which misses Young’s phrase by an eighth note. Jones then catches up, and on the second bridge, he waits for Young to signal the accents. Basie is also a co-conspirator in this rhythmic intrigue.

As Carl Smith starts his trumpet solo, Basie switches to a totally different background. All this provides a clear picture of Walter Page’s concept of a rhythm section creating contrast to keep a performance interesting. Not content to maintain one pattern throughout an entire performance, Page taught Basie and Jones to think orchestrally and in terms of counterpoint.

Lester Young also weighs in with a never-ending set of riff variations, creating a tapestry not unlike the New Orleans jazz he had grown up with during the previous decade. Smith proves to be an exemplary player who responds to everything going on around him. The next episode finds Smith, Young and Basie seamlessly trading two-bar phrases for sixteen measures. Jones, echoing his original entrance, lays out for the first eight, and with that small gesture creates a symmetry that presages the end of the performance.

His eight-bar solo is played exclusively on the snare drum. He plays the whole session on snare and hi-hat only — anticipating by several decades Leon Parker’s minimalist experiments of the 1990s. The band jams out in true New Orleans fashion, before a short reprise of the trading and the coda. 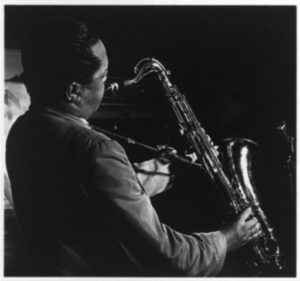 Lester Young came from a musical family led by the patriarch, William “Billy” Young, who played all the instruments and made a living first as a teacher and then as a touring bandleader. Although born at his mother’s family home in Woodville, Mississippi on August 27, 1909, Young was raised in and around New Orleans, and was entranced by music from an early age.

Rhythm was vital to his music and it comes as no surprise that he started on the drums before switching to the saxophone. After the trials and tribulations that came from a sensitive nature married to an indefatigable need to assert his musical prowess, the teenaged Lester Young emerged as a demon on the soprano, alto, and baritone saxophones.

One misconception is that contrary to the legend, Lester Young was never really a Kansas City musician. It’s true that he was playing there with Count Basie in 1936 when they got the call to come to New York, but he had spent the great majority of his time in the preceding years based in Minneapolis. Billy Young had established the family there in the late ‘20s and Lester found the atmosphere convivial enough to make it his home base.

It was in and around Kansas City that the best bands in the region were located, so Lester Young began to gravitate there more and more frequently. There were stints with the famed Blue Devils, during and after Walter Page’s tenure as leader, and six months with King Oliver in 1933.

Indeed, this collaboration between Lester Young and Louis Armstrong’s mentor facilitates many fascinating connections in the jazz lineage. Many musicians have shared the bandstand for a night or two in bands put together for special occasions, but to play in a band for an extended period led by a major player cannot help but be a significant influence.

The enormity of the linkage becomes apparent when you consider that Lester shared musical ideas with both King Oliver, who was Armstrong’s mentor, and with drummer Roy Haynes, a favorite of Charlie Parker, John Coltrane and Chick Corea.
– Loren Schoenberg; liner note excerpt from Mosaic Records: The Lester Young Count Basie Sessions 1936-1940 and Classic Columbia, OKeh and Vocalion Lester Young Lester Young with Count Basie 1936-1940