Grant Green was a master of rhythm accent and displacement and this is a far more subtle virtuosity than encyclopedic harmonic knowledge or quicksilver arpeggio running. - Bob Blumenthal

Grant Green takes a note or a basic phrase and repeats it over several bars, which can sound limited if you miss how the shifting stresses reveal the several meanings the idea can take on. He is an expert at generating amazing swing within a melodic idea by leaning into some notes and back on others, creating an irresistible ebb-and-flow.

The growing appreciation for these nuances explains why  Grant Green is held in higher esteem posthumously than in his lifetime.

Developing his own style
Grant Green was born in St. Louis Missouri on July 6, I931. By the age of 13, he was working professional jobs in his hometown and across the Mississippi River in East St. Louis, Illinois. He would remain a vital part of this scene until he relocated to New York in I960.

During these years he developed his distinctive style which for the most part avoided chordal playing and intervals in favor of single-note lines (so as not to crowd the pianist or organist, he explained to critic Robert Levin). To a large extent, this evolution can be traced to Green’s musical preferences.

“I don’t listen to guitar players much. I dig horn players. I was very much influenced by Charlie Parker, very much. And among guitarists, there was Jimmy Raney. I like his style of improvising, and he gets a good sound…I also like Kenny Burrell very much…and, of course, there was Charlie Christian. I love his records. You can’t get around him.” – Grant Green

With his bluesy, riff-based approach, Green’s debt to Christian was clear, and in many ways, he was the most Christian-like of the legendary guitarist’s followers. It was the horn players though, that provided an equally strong influence. Green told Levin of the nights he would stay up transcribing Parker solos; and a look at his repertoire verifies that he was also hearing Miles Davis, Sonny Rollins and John Coltrane.

Two saxophonists turn out to be important mentors.
Tenor man Jimmy Forrest worked extensively with Green in St. Louis during the’50s; at decades end, when Forrest was touring with the Harry “Sweets” Edison quintet and had the opportunity to record for Delmark with Edison’s rhythm section (Harold Mabern, Gene Ramey and Elvin Jones), he had Green flown to Chicago for the dates. The resulting albums, All The Gin Is Gone and Black Forrest are the earliest documents of Green’s skills.

Around this same time, alto saxophonist Lou Donaldson heard Grant Green during a tour of the MidWest. He encouraged the guitarist to move to New York, introduced him to Lion and Wolff, and brought him into Rudy Van Gelder’s studios for the first time on January 23, 1961 for the album Here ‘Tis.  – Bob Blumenthal, liner note excerpt Mosaic Records: The Complete Blue Note Recordings of Grant Green with Sonny Clark

At the heart of so much great jazz there is something ineffable, having to do with how each musician relates to his or her partners. We can’t always articulate what occurs when solo line, chordal comp, bass walk and drum beat mesh, but we can surely hear and feel it. We hear and feel it in the Count Basie band, with the All-American Rhythm Section, and in the Miles Davis quintet on more than one occasion.

Some credit is due the discerning Blue Note trust of Alfred Lion and Francis Wolff, but Grant Green had a knack for striking up such complementary partnerships over the course of his career. – Bob Blumenthal 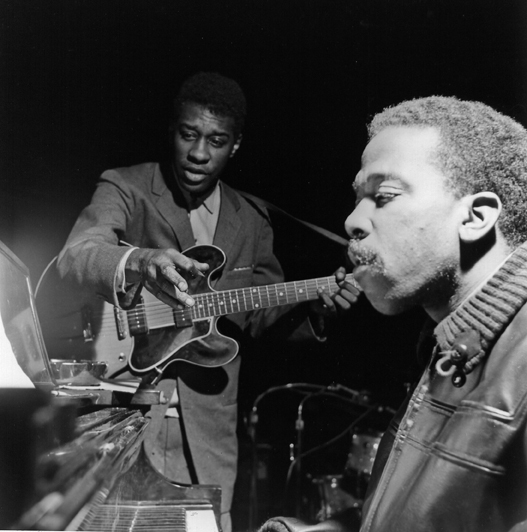 “On Green Dolphin Street” begins very close to the classic l958 Miles Davis sextet version, with Sonny Clark’s unaccompanied intro recalling his friend Bill Evans and Sam Jones stroking pedal points on the theme a la Paul Chambers. The pianist retains his opening break figure going into the guitar solo, though and the performance quickly gains a more personal stamp. Grant Green, rising to the rhythm section’s hard-grooved challenge, creates two inspired choruses, while Clark inhabits that zone of his (especially in his first chorus) where phrases seem to fall off a log. Jones gets one, and shows his usual strength without strain, while Green is more insistent in his return statement. 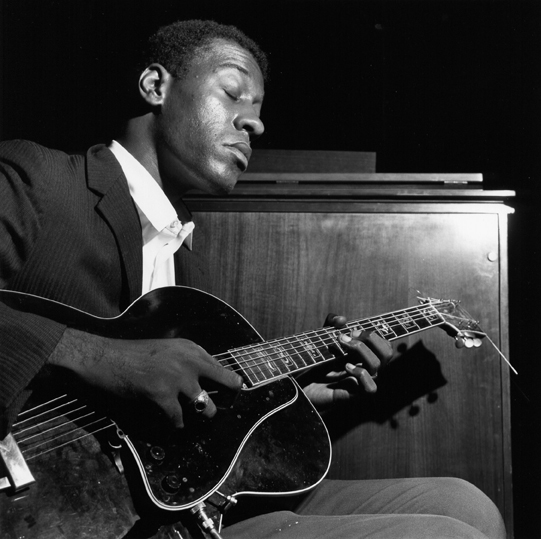 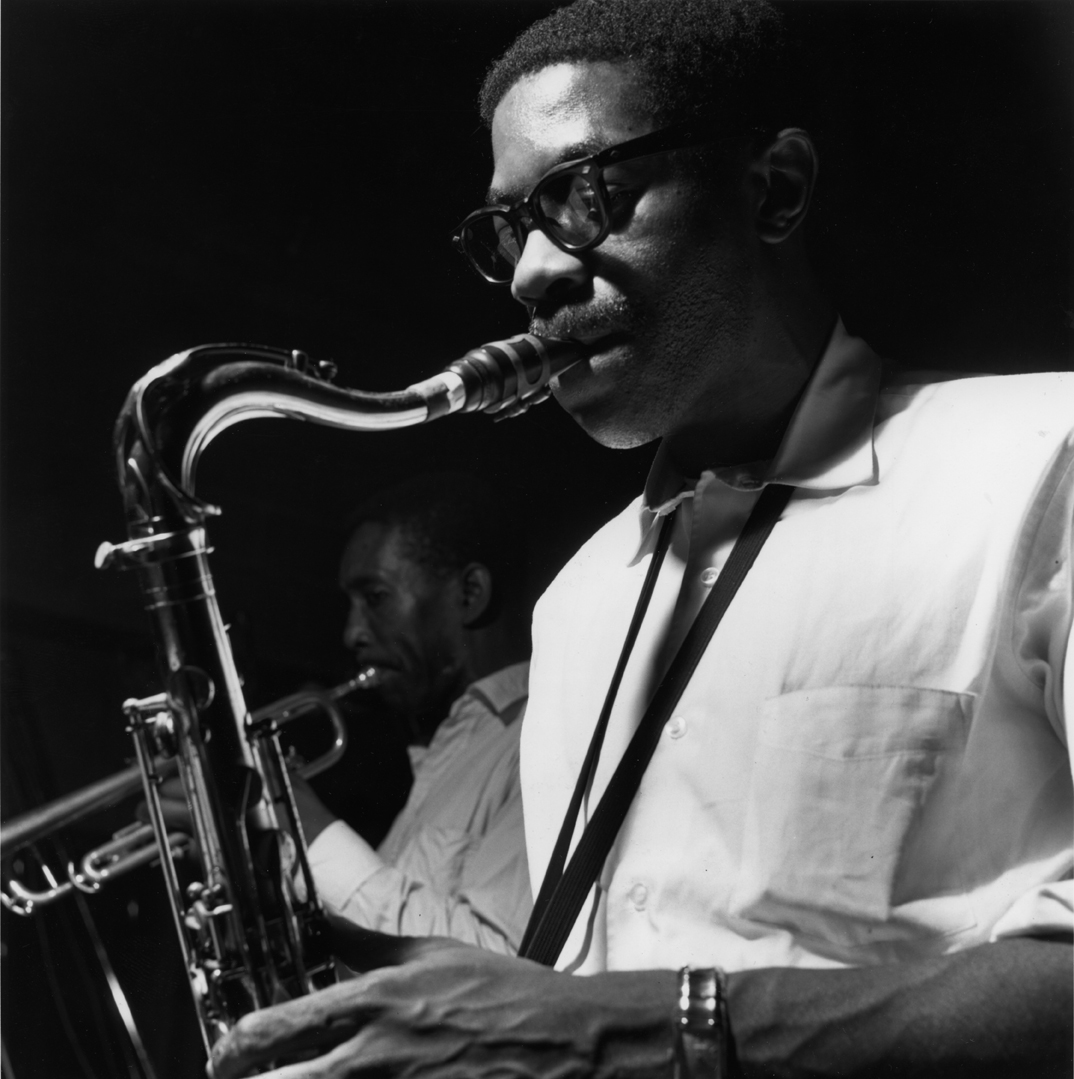 Grant Green was so busy in the Blue Note studios as the label’s house guitarist during 1961-65 that some of his sessions were not originally released until after his 1979 death. Still, it is surprising that Solid had to wait so long to be made available for it features the guitarist with quite an all-star group, one that might have been a bit taken for granted at the time but is quite timeless.

During his prime years, Green had an instantly recognizable style, one that emphasized single-note hornlike lines over chords. He was quite versatile, sounding equally comfortable with organ groups, in a quartet where he was the only “horn,” or with all-star groups, whether playing straight ahead jazz, hard bop, Latin, spirituals or even “Tumbling Tumbleweeds” and “I Want To Hold My Hand.”

Solid teams Green with tenor-saxophonist Joe Henderson, altoist James Spaulding, pianist McCoy Tyner, bassist Bob Cranshaw, and drummer Elvin Jones. Listeners not familiar with this album and who think of Tyner and Jones during the era as being primarily John Coltrane’s sidemen will be a bit surprised at how easily and naturally they adapt themselves to this straight ahead music.

Joe Henderson has long been recognized as one of the all-time greats but James Spaulding is often overlooked. Check out his extensive solo on “Minor League,” a medium-tempo Duke Pearson blues. Spaulding set the standard for the entire album, making one wonder why, unlike Henderson, Tyner, Jones and of course Green, he never had the opportunity to lead his own album for Blue Note.

After Spaulding lays down the gauntlet, the solos by Green, Henderson and Tyner keep the momentum flowing on “Minor League.” George Russell’s “Ezz-thetic” (his take on “What Is This Thing Called Love”) is taken at a raging tempo. Green manages to sound bluesy, Spaulding is passionate, and Henderson, Tyner and Jones all make memorable statements.

The guitarist’s “Grant’s Tune” is an inventive soul jazz piece that has the flavor of the Mid East while Sonny Rollins “Solid” gives the musicians an opportunity to dig into the boppish number. Joe Henderson’s “The Kicker,” with its memorable melody line, should be played more often. Both of the saxophonists excel on that piece.

Solid is one of Grant Green’s finest Blue Note albums even if it had to wait nearly two decades to be released.

This rare footage on Grant Green finds him in Paris on October 26,  1969. Although he’d already formed his own jazz-funk band by this time, he is heard  performing an excellent straight ahead set with bassist Larry Ridley and drummer Don Lamond. Green revisits two originals by his favorite composer Sonny Rollins:  “Oleo” and “Sonnymoon For  Two.” The 32-minute concert, which was never aired at the time, is uncut and unedited. 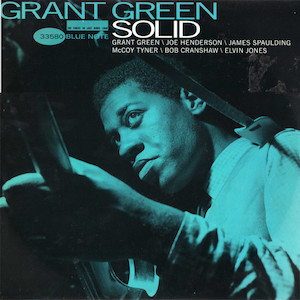 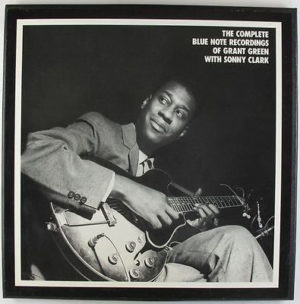