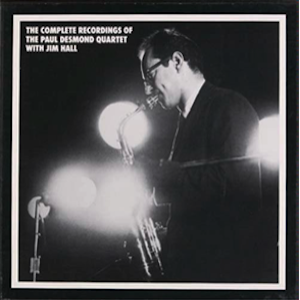 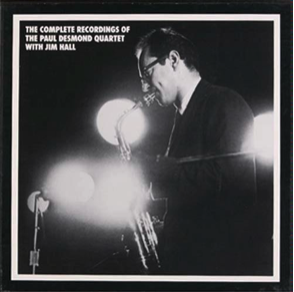 “Dry Martinis.” That’s Paul Desmond; own description of his celebrated sound: the sexy, subtle alto, cutting through the counter-rhythms and affirmative chords of the Dave Brubeck Quartet. Tangible. Minimal. Sophisticated. Straight up.

Now hear that sound in a very different setting. Quieter. Less about contrasts, more about simpatico. Introducing The Complete Recordings of The Paul Desmond Quartet with Jim Hall (1959-1965).

Here lyrical phrases join with the swinging perfection of Jim Hall, the quiet authority of Modern Jazz Quartet drummer Connie Kay, and either Percy Heath, Gene Wright or Gene Cherico on bass to create masterful sides. The quartet sounds like they played together for years, though they never played a single live gig.

This is Desmond as leader and musical organizer, whose wit and warmth come singing through his song choices, his arrangements and his compositions.

Many of Desmond; own pieces have a breathy bossa nova lyricism, true to the Brazilian original, not the jivey Americanized version. Desmond called the real bossa nova a “wild, subtle, delicate thing.” Those words could describe this whole collection.

A great six-year studio match up. The sessions are gathered chronologically into one six-LP set, beginning with a 1959 Warner Bros. album and continuing into 1965 with four more RCA albums. Included are a rare title that only appeared on a Playboy Records anthology, and 12 previously-unissued performances from the RCA years.

A 12-page booklet contains a new essay from Desmond’s close friend, journalist Doug Ramsey, as well as reprints of some of Desmond famed dry prose: “I have won several prizes as the world’s slowest alto player, as well as a special award in 1961 for quietness. “

“Jazz is rarely as pretty as this; and jazz this pretty is practically never so full of substance.”

– The Times of London, Richard Williams

“A teaming made in lyrical heaven. Entering this world of breathy beauty and ready wit, you’ll find it perfectly easy to sail through all six records and then start over again. And again.”