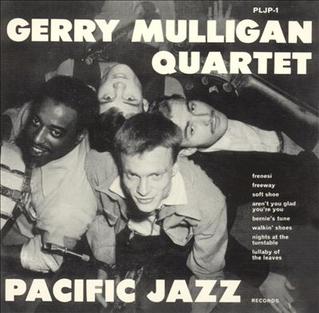 Often as important as the musicians who recorded for jazz companies were the individual producers. They secured their places in jazz history through their selection of artists and attention to a specific area or category of music. One such producer is Richard Bock of Pacific Jazz, whose vitality and craft produced a unique body of recordings and began the evolution of cool jazz.

Like so many stories about the birth of a jazz record label, the Pacific Jazz story started small—with the passions of a solitary man. Richard Bock was still a student at Los Angeles City College when he got work doing odd jobs for Albert Marx, owner of Discovery Records. There, at an Art Pepper session, he had his first taste of producing. And soon he was out each night, combing the jazz clubs of L.A., his feelers alert for fresh talent.

That’s where he first heard Gerry Mulligan. Bock convinced Mulligan to let him record some experimental sessions in his accountant’s living room. Immediately, Bock knew what he had. He talked some friends into pooling their money to start a record label with a focus on the cool jazz sound. And in 1952, Mulligan’s living-room recordings became the first Pacific Jazz singles.

The pianoless Gerry Mulligan Quartet, which launched the careers of Mulligan, Chet Baker and Chico Hamilton, lasted only one year (June ’52-’53).  These two remastered CDs cover all 42 tracks that the quartet recorded for Pacific Jazz in that one year.  Recorded live at the Haig and in various studios, this music is essential cool jazz.

Soon Bock was recording Gerry Mulligan’s regular Monday night gig at the Haig. Because the Haig’s piano was removed to make room for Red Norvo’s vibes, the Mulligan Quartet developed without a piano. Within six months, Mulligan’s new music was written up in Time magazine, and suddenly the fledgling Pacific Jazz label had a “big time” success on its hands with the growing popularity of cool jazz.

Then, Bock’s stock split. Chet Baker left Mulligan to form his own quartet with Russ Freeman, giving Pacific Jazz two hot groups instead of one. And a few months after that, Baker started singing, making him one of the hottest attractions in all of jazz.

In 1954, Richard Bock began recording a series of albums featuring Laurindo Almeida and Bud Shank, which wedded jazz and Brazilian samba rhythms. This was “Bossa Nova” eight years before it had a name. The visionary Bock also recorded many landmark non-jazz recordings, including Indian classical music by Ravi Shankar, comedy by the legendary Lord Buckley, and blues by the great Lightning Hopkins.

Today it’s hard to imagine the history of jazz without the cool jazz music movement that Richard Bock helped preserve. Hard to believe, too, that it began as humbly as it did, in an accountant’s living room and in one man’s heart.

CHET BAKER
BAKER AND CREW
This Crew, a quintet with Phil Urso and Bobby Timmons, was one of Chet’s hardest-swinging groups, with great tunes by Gerry Mulligan, Al Cohn, Miles Davis and others. Six bonus tracks have been added to the original LP’s eight selections.

CHET BAKER
1953 QUARTET WITH RUSS FREEMAN
The trumpeter’s first quartet included the essential Russ Freeman as pianist and musical director. All 25 tracks recorded by this quartet in July and October of 1953 are gathered on this one CD. Freeman’s dazzling themes and his hard driving piano are the perfect foil for Chet’s personal, lyrical trumpet style. Always an instinctive player, Baker’s solos flow with one melodic idea after another.

CHET BAKER SINGS
As Gerald Heard’s liner notes point out, it’s difficult to decide whether Chet Baker was a trumpet player who sang or a singer who played trumpet. His first vocal session, was recorded in February 1954 which covering tracks seven through 14. Baker’s voice is so innocent sounding and pure you won’t be able to turn it off. The spacious musical setting, a simple trumpet and piano (Russ Freeman)-bass-drums rhythm section, is perfect for Baker’s low-key style. “Chet Baker Sings” is a classic of West Coast cool jazz

MILES DAVIS
BIRTH OF THE COOL
This album is actually a collection of Davis’s three 1949-50 nonet sessions with the unusual instrumentation of trumpet, trombone, French horn, tuba, alto sax, baritone sax, piano bass and drums. The arrangers included John Lewis, Gerry Mulligan, Gil Evans and John Carisi. As 78s, they had more influence on jazz musicians than the public. The texture and voicings of this ensemble definitely had the relaxed feeling of cool, even on classic bebop tunes. The nonet plays John Lewis’s arrangement of Denzil Best’s bebop classic “Move” at a breakneck tempo, but with an air of cool detachment. Miles and Lee Konitz deliver lyrical solos before the band exchanges fours with Max Roach.

DAVE BRUBECK
DAVE DIGS DISNEY
The quartet with Desmond explore classic tunes from Disney films like “Someday My Prince Will Come” and “When You Wish Upon A Star”.

DAVE BRUBECK
TIME OUT
The experiment with time signatures that became one of the most popular jazz recordings in history. With Paul Desmond, Gene Wright and Joe Morello. Includes “Take Five” and “Blue Rondo A La Turk.”

DAVE BRUBECK
JAZZ GOES TO COLLEGE
Brubeck and Desmond at their best! The blues “Balcony Rock” is one of the finest performances by either man. “Le Souk” is a modal piece well ahead of its time. Bob Bates and Joe Dodge fill out this 1954 version of the quartet.

PAUL DESMOND
TAKE TEN
Paul Desmond’s quartet albums with guitarist Jim Hall and drummer Connie Kay reflect his genius in its most perfect setting. Lighter in weight than the Brubeck quartet, the alto saxophonist’s warm, lyrical solos are the main focus. This 1963 album includes several Desmond originals (including a sequel to his “Take Five”), two Luis Bonfa melodies and three standards. His version of “Nancy (With The Laughing Face)”, written by Phil Silvers on the occasion of Nancy Sinatra‘s birth is a masterpiece.

PAUL DESMOND
DESMOND BLUE
Recorded at Webster Hall with a string section arranged by Bob Prince and Desmond’s quartet with Jim Hall and Connie Kay, the lyrical alto saxophone master caresses a program of beautiful ballads on this, his most celebrated album.

STAN GETZ & J.J. JOHNSON
AT THE OPERA HOUSE
Getz and J.J. Johnson, backed by Oscar Peterson’s trio and drummer Connie Kay, are at their peak on this classic album, which was actually two albums! The stereo album was indeed recorded at Chicago’s Opera House, while the mono album was done in Los Angeles on the same tour. With the exception of the stereo “It Never Entered My Mind,” both versions are combined on this 73-minute CD.

STAN GETZ
POETRY
In 1983, the masterful, lyrical Stan Getz invited Albert Dailey, a consummate pianist with whom he’d worked frequently in the ’70s, to his home studio in Irvington, New York. There they created seven intimate and passionate musical statements on jazz standards that are highlights in both men’s careers.

STAN GETZ & JAOA GILBERTO
GETZ/GILBERTO
This magical, definitive, and pioneering blend of two musical cultures by Getz, the magnificent vocalist and guitarist Joao Gilberto, and the great Jobim stands as one of the most important recordings in popular music history. Although Jazz Samba created what many thought was a fad, with scores of bossa nova recordings following, this 1963 masterpiece so greatly realized the potential of this music that it became an essential part of the jazz vocabulary. It didn’t hurt to have one of the biggest jazz records in history, “The Girl from Ipanema”, which featured Gilberto’s wife Astrud (who had never performed before this recording session!)

SHELLY MANNE
MY FAIR LADY
“My Fair Lady” was a recent hit on Broadway in August 1956 when the formidable team of Andre Previn, Leroy Vinnegar and Manne tackled the score from a pure jazz angle. The album became a best seller and a classic. Previn and Manne continued to transform other show scores into great paino trio jazz music for the remainder of the decade.

WARNE MARSH
ALL MUSIC
This 1976 quartet date with Lou Levy on piano, Fred Atwood on bass and Jake Hanna on drums contains plenty of superb playing by this amazing tenor saxophonist.

WARNE MARSH
LIVE AT DANA POINT-2
These two CDs come from a newly discovered tape of Marsh’s quartet with Joe Albany, Bob Whitlock and Red Martinson on October 7, 1957 at the Galleon Room in Dana Point, California. Marsh is brilliant as always. This is most likely the gig that Marsh, Albany and Whitlock were rehearsing for when they taped “The Right Combination”.

MODERN JAZZ QUARTET
PYRAMID
After seven years, many groups would tend to rest on their laurels, but not the MJQ. This 1959 album is one of their finest in terms of variety, interplay and pure swing.  Material ranges from Ray Brown’s title tune to Jim Hall’s “Romaine”, Ellington’s “It Don’t Mean A Thing” and a reworking of “Django”.

GERRY MULLIGAN
KONITZ MEETS MULLIGAN
This 1953 recording captures jazz artist Lee Konitz as guest soloist with the innovative Gerry Mulligan Quartet with Chet Baker at its creative peak. Konitz blends beautifully with some of the best playing of his career. The first six tunes were recorded live at The Haig in LA and the rest were done in the studio the same week.

ART PEPPER
QUARTET (TAMPA)
This rare November 25, 1956 Tampa session with Russ Freeman on piano, Ben Tucker on bass and Gary Frommer on drums has long been considered among Pepper’s best. His hard-swinging, Bird-influenced alto was already finding its own voice.

SHORTY ROGERS
SWINGING MR. ROGERS
This 1955 Atlantic album featured the greatest edition of Shorty Rogers And His Giants – the quintet with Jimmy Giuffre, Pete Jolly, Curtis Counce and Shelly Manne. Highlights include the adventurous “Martians Go Home” and “Not Really The Blues.”

LENNIE TRISTANO
THE NEW TRISTANO
This release combines this remarkable pianist’s first Atlantic album from 1955, which included four trio numbers (#1-4) and five live tracks with Lee Konitz, Gene Ramey and Art Taylor, with all but one of the startling 1960-61 solo pieces issued as “The New Tristano”.