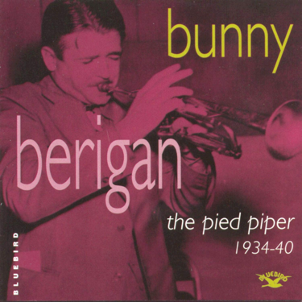 The Pied Piper is the perfect introduction to Bunny Berigan’s music.

Bunny Berigan and Benny Goodman first met up in a recording studio as part of Ben Selvin’s Orchestra in 1931.  The trumpeter appeared on a commercial dance band session led by Goodman that year and they crossed paths on a regular basis including on sets led by Bing Crosby (a classic version of “My Honey’s Lovin’ Arms” in 1933), Mildred Bailey, Ethel Waters, Adrian Rollini, and on a Feb. 1934 radio transcription date led by the clarinetist.

In June 1935, Berigan was persuaded by Goodman to temporarily leave the studios and join his struggling big band on a cross-country tour.  Before they left, Berigan recorded eight songs with the orchestra. His solos on “King Porter Stomp” and “Sometimes I’m Happy” were Goodman’s first best-sellers. While the tour was an on-and-off struggle, its climatic performances at the Palomar Ballroom in Los Angeles were greeted by such enthusiastic crowds that it virtually launched the swing era. Despite that, Berigan left Goodman in September to return to the studios.

Lightning struck a second time in 1937. Berigan and trombonist Tommy Dorsey had recorded together many times since 1930 in a variety of settings. Dorsey’s big band, which was formed in 1935 after he split with his brother Jimmy Dorsey, was reasonably successful but had not yet reached the top rung. In Dec. 1936 Dorsey started using Berigan on his radio shows and record dates, an association that lasted just six weeks but made musical history. Berigan appeared on five record sessions with Dorsey resulting in 18 titles including giant hit versions of “Marie” and “Song Of India.” Those performances owed much of their popularity to Berigan’s solo choruses. In fact, Dorsey had both of the solos harmonized for his big band and they were played by his trumpet section for the next two decades.

Having helped others, Bunny Berigan got the desire to form his own big band and finally leave the studios. There was one major problem; Berigan was an alcoholic. The excessive drinking had not hurt his trumpet playing, but it made it questionable whether he would have the iron will and discipline to be a successful bandleader in the highly competitive swing world.

The Bunny Berigan Orchestra started out with a great deal of potential. The 29-year old trumpeter had made many friends, the Victor label (for whom Goodman and Dorsey had had their first hits) was happy to sign him up, and Berigan was soon at the head of a 13-piece orchestra, one that included the promising young tenor-saxophonist Georgie Auld. On Aug. 7, 1937 they recorded a magnificent version of Berigan’s theme song “I Can’t Get Started” which featured the leader’s vocal and dramatic trumpet playing. It would be his only hit record.

The Pied Piper (1934-40) is a very well-conceived single disc that has many of the highpoints from this period including some of Berigan’s best recordings with his big band. Among its other contents are four songs with the Benny Goodman Orchestra (the two hits plus versions of “Jingle Bells” and “Santa Claus Came In The Spring” that have outstanding Berigan solos), four songs with Tommy Dorsey (including “Marie” and “Song Of India”), and a few all-star sessions including classic renditions of “Honeysuckle Rose” and “Blues’ in a quintet with Dorsey, pianist Fats Waller, guitarist Dick McDonough and drummer George Wettling that lives up to its great potential.

The eight Berigan big band titles on The Pied Piper include “I Can’t Get Started,” an extended and memorable rendition of “The Prisoner’s Song” (which has one of Berigan’s hottest solos), his beautiful ballad playing on “Trees,” and “Jelly Roll Blues.” Concluding the CD is a radio version of “I’ve Found A New Baby” from Berigan’s second stint with the Dorsey Orchestra in 1940. 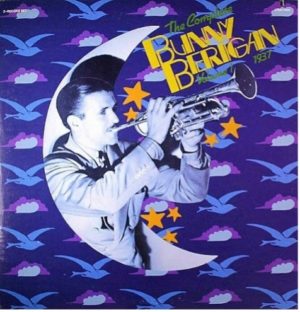 As part of the Bluebird reissue series put out by BMG/RCA in the 1980s, three Bunny Berigan double-LPs were released that contain all of his recordings as a big band leader during 1937-39. There have been other reissue series since then, but they have generally more selective and piecemeal.

The first volume covers the April-Oct. 1937 period. Berigan, Auld, clarinetist Joe Dixon and trombonist Sonny Lee are the main soloists, Gail Reese has easy-to-take vocals and, in addition to “I Can’t Get Started” and “The Prisoner’s Song,” the better selections include “Swanee River,” “Mahogany Hall Stomp,” “Turn On That Red Hot Heat,” and “Caravan.” The band also recorded some forgettable material as most swing orchestras did but the young players are enthusiastic, and one can sense the group’s possibilities.

That changes to a large extent on Volume Two which has the recordings from Oct. 1937-June 1938. While the orchestra’s personnel were reasonably stable, with pianist Joe Bushkin, trombonist-arranger Ray Conniff and singer Ruth Gaylor being the main new additions by mid-1938, the material that the Berigan Orchestra was being given to record is mostly pretty inferior. One wonders what the band was supposed to do with such songs as “Piano Tuner Man,” “Rinkatinka Man,” “An Old Straw Hat,” “Moonshine Over Kentucky,” and “Round The Old Deserted Farm.” There are a few worthwhile numbers, particularly “In A Little Spanish Town,” “Black Bottom,” “Trees” and “Russian Lullaby,” but otherwise it is pretty tough going.

Surprisingly, the music on Volume Three is generally much better. The young Buddy Rich was Berigan’s drummer for a few months before leaving for a more lucrative position with Artie Shaw and he gave a noticeable lift to the band. Berigan was able to interest the label in letting him record five Bix Beiderbecke songs (band arrangements of Bix’s four piano pieces plus “Davenport Blues”) and other worthy performances include “Livery Stable Blues,” “High Society,” “Sobbin’ Blues,” “I Cried For You,” “Jazz Me Blues,” and “Little Gate’s Special.”

But things were noticeably slipping. There were only two recording sessions in 1939 and by the Nov. 28 date, the personnel were completely different than it had been at the beginning of the year. In early 1940 Berigan declared bankruptcy and reluctantly broke up his big band. Berigan made two attempts to lead his own big band again during 1941-42. He recorded eight numbers for the Elite label that found him sounding fine even if he was not hitting high notes.

On June 2, 1942 Bunny Berigan died from cirrhosis of the liver and pneumonia. He was just 33. 79 years later, his best recorded solos are still exciting classics that sound fresh and unpredictable. 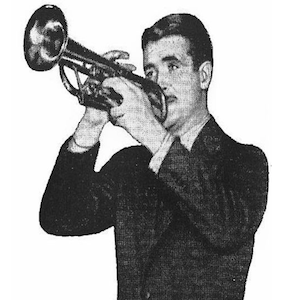