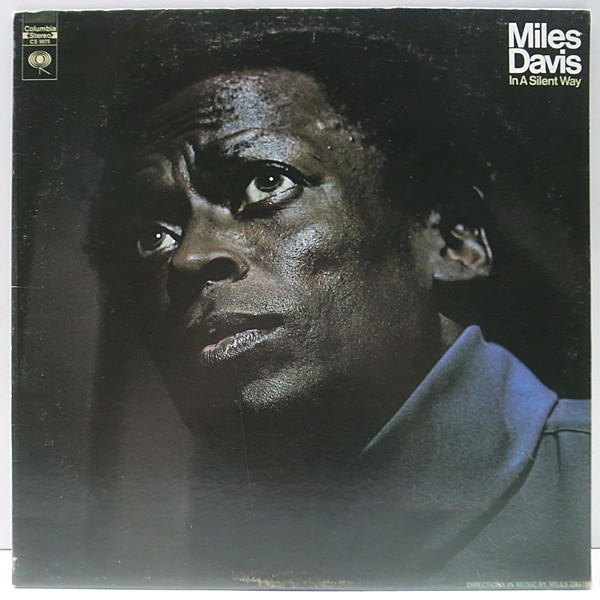 Miles Davis
In A Silent Way

A summation of Miles’ clearly structured, expansive and ‘auteuristic’ efforts to create a new sound, the merging of jazz, soul and rock musical language. – Bob Belden

By Michael Cuscuna
The In A Silent Way sessions cover a mere six months of Miles Davis’ recording activity. But this was a period of rapid change and growth for him. It chronicles the quantum leap from the dissolution of the Shorter-Hancock-Carter-Williams quintet to the startling sound of the Bitches Brew era.

The session introduces Joe Zawinul, Chick Corea, Dave Holland, Jack DeJohnette and John McLaughlin, who would all exert an influence within Miles’ musical sphere and beyond it. It also introduces the multiple keyboard configuration (Herbie Hancock, Corea and Zawinul) and the guitar in his music.

All but one of the compositions are by either a newly revitalized Miles or Joe Zawinul, who was reaching a new level in his writing. With In A Silent Way, Miles Davis makes a clear and deliberate move away from standards and conventional jazz compositions to texturally and harmonically rich pieces which also lend themselves to loose, open-ended forms on which to solo. – Mosaic Records liner notes

By Bob Belden
It was a journey home. Home was Vienna, Austria. Joe Zawinul was visiting his parents for Christmas and was bringing his family. Home can mean many things. Family. Friends. Food. But also peacefulness and love. A radiation of human warmth. “On this trip I wrote In A Silent Way”, Joe recalled.

Perhaps the seeds of inspiration for In A Silent Way lie in that feeling of home, where the sound of shepherds’ horns can be heard echoing through the hills. From this nostalgic memory flowered one of the music world’s most endearing melodies. Ironically, In A Silent Way soon became a catchall for the album, a subtle hint that Miles was moving forward ‘in a silent way’. Rather than revolutionize the world in the fashion of the times Miles directed the flow of his sound and ideas that would be in exact opposite of the tenor of the time.

It is also ironic that the culmination of Miles’ efforts as a composer and conceptualizer on The Complete In A Silent Way Sessions defines not only the composition that Zawinul composed but a summation of Miles’ clearly structured, expansive and ‘auteuristic’ efforts to create a new sound, the merging of jazz, soul and rock musical language.

As the history of jazz has been written and re-written about the importance of this movement that Miles directed — the grafting of jazz and rock or jazz and soul were not new — one thing is clear: Miles Davis provoked the music world. Hearing all the music recorded during six intensely focused months for In A Silent Way as it happened and in historical perspective will bring new light to Miles’ methods, intentions and evolution.

The Fender Rhodes sound
It wasn’t until May 1968, when Miles recorded Stuff, that he used electric keyboards exclusively in the studio. This one change in orchestration resulted in a dramatic change in the band’s sound that would forever redirect the ears of Miles Davis. The Fender Rhodes would provide a bridge for Miles into a more progressive environment. There was no defined way to approach using the Rhodes in jazz at the time. It was a new instrument, but the possibilities intrigued Miles.

The fire that was ignited by Miles’ creative spark was Tony Williams. Tony had taken the art of jazz drumming to new heights in his tenure with Miles Davis. He overwhelmed the overall sound of Miles’ groups in live performances but in the studio he was the model of clarity and style. When rock and roll and soul started creeping into the mainstream of the jazz world, Tony was well aware of what was going on. So when the pop drummers got louder, Tony got even louder. But Tony was able to make the volume absolutely right due to his tremendous control of his instrument. And he could swing. Tony and Ron Carter worked together creatively like very few bass/drum teams of the time.

Suddenly the sound of Miles’ band was red-hot all of the time and when the rock and soul flavor began to enter the lexicon of the quintet, Tony was able to absorb and redevelop this new language into a unique crossover style of jazz drumming. For Miles Davis in 1968 all of the forces of change were in place. He had switched over to the electric piano. He watched as Tony Williams literally invented a new approach to drums and sound. Miles was now inspired to write music and experiment with the abstract world of composition for the In A Silent Way Sessions.

The studio roles of Herbie Hancock and Chick Corea were defined by Miles during the 1968 sessions. Corea seemed to be supporting the music from a rhythmic point of view. As a drummer himself, Corea always had a percussive style of accompaniment and soloing; his touch on acoustic piano is extraordinary. It makes sense that in trying to get the percussive harmonic feel, Davis would assign one keyboard that role.

Enter Joe Zawinul
This would free up the other keyboardist to add color. In this case, one of the great ‘colorists’ in jazz history, Herbie Hancock. Miles knew what Herbie would add but he wanted to add one more element, a third keyboardist and he had in mind Josef Zawinul.

Joe was to be a new stimulus to Miles as Wayne Shorter had been just a few years earlier. Miles had followed Zawinul’s work with his friend Cannonball Adderley closely throughout the ’60s. And from this session until February 1970, Joe would not only play the third keyboard (first organ, then electric piano), often doubling the all-important bass lines in Miles’ tunes, but he would also contribute nine important compositions to Davis’ sessions. Joe remembers, “He wanted me to put basslines on some of the songs other than mine. It was always fun — he heard other bells and that was inspiring”.

Miles Davis had made his break from the jazz tradition by starting a new one, one that would flower first into the Tony Williams Lifetime and soon after, Weather Report, Mwandishi and The Mahavishnu Orchestra that by the very nature of imitation dissolved into a repetitive commercialized sub-genre of jazz, loathed or tolerated by some and worshiped by others.

But the In A Silent Way sessions, wholly original and progressive, neglected, controversial and misunderstood can be reevaluated on musical merits, and on the contributions that have come from all of the participants on these recordings. To quote Chick Corea, “Miles was truly the Master Magician and I feel proud to have been a small part of the happenings.”

In A Silent Way

In A Silent Way is the penultimate album for Miles, a musical mystery tour that revealed both a new recording aesthetic as well an overt embrace of rock music language. Miles began to use the studio in a way that the pop acts of the time were. Of the Bitches Brew Sessions (the ultimate recording of Miles’ new approach) on which he played, Harvey Brooks said that “Miles began to do things the way rock bands did, by jamming”. Brooks knew what Miles was doing but had no idea of the sessions and process that led up to this approach.

The story of In A Silent Way is indeed one of legend. What the musicians recorded was not exactly what they are represented by. The album is indeed a masterful illusion; one that takes a very post-modern approach to what defines a jazz performance. What Miles Davis and Teo Macero ultimately achieved was a classic example of what Davis had been looking for- a “groove album” as DeJohnette describes it. What is meant by groove album is that they eliminated the exposition altogether and focused on development (translation: no melodies, only solo vamps). He had been recording this way to some degree for a while; nothing had yet been assembled and released. On this day, he found that groove.

On the master of In A Silent Way in a stroke of genius, Miles asked McLaughlin to play the melody with no other accompaniment. On the session reel, McLaughlin plays a few chords, trying out a voicing and then he starts to ‘rehearse’ the melody. McLaughlin recalled this moment “We had a tune by Joe Zawinul-with lots of chords”. Miles said, “Well, John, why don’t you play it on the guitar?” I said: “Do you want all these chords?”

Suddenly McLaughlin heard what Miles wanted. “He wanted me to play the tune with just one chord! And then suddenly everybody was waiting for me to start the tune and I didn’t know what to do. I had no idea. Miles said: “Well, you know the chord.” So I gave him the chord. That’s all. Two chords, in fact. I started to play, and I realized the light is on; and I played the first solo. Wayne Shorter played the tune; Miles and Wayne played it together. I was confused, but I was playing on instinct. And then we played it back, and I was shocked how beautiful it was”.

Holland has added an E pedal and suddenly you have an arrangement of beautiful simplicity. Miles had decided not to complicate the melody and the result is a masterpiece in miniature. The ‘folk-like’ way McLaughlin instinctively played got the desired result — the sound of innocence and loneliness. This mood reflected the impressions that Joe had “as a shepherd boy in Austria”. McLaughlin sums it up. “Joe Zawinul had brought the tune in, and Miles, in one minute, had brought the real essence, the beauty out of it” – Bob Belden, liner note excerpt Mosaic Records: Miles Davis – The Complete In A Silent Way Sessions (5 LPs) 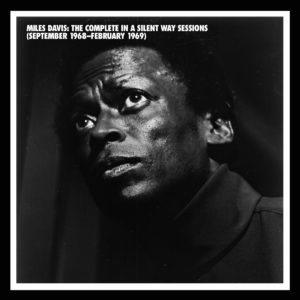 Miles Davis
The Complete In A Silent Way
Discography

DISCOGRAPHY
The original album is given after each selection. Where known, the take number is given after the master number for each selection. If a performance was recorded in sections and later assembled to form a complete take, an asterisk appears in place of a take number.
With the exception of session D on which both electric pianos are heard in the center, Chick Corea is heard in the left channel.

note: “Splash” was first issued on PC2-36278, but without its introdcution.
On the rejected interludes, which are composed fragments with no improvisation and which were not assigned master numbers, Chick Corea plays organ and Herbie Hancock plays electric harpsichord.

note: The first issued version of “Ascent” used crossfades in two places. These have been corrected with clean edits that correct the phrase and bar structure of the piece. Because of a mislabelled Columbia mix reel, many discographies have listed the first section of “Ascent” as being an interlude from the November 25 session. This is not the case. This piece was recorded in order in four sections at this date and has nothing whatsoever to do with any interludes from the prior sessions nor was this piece ever tentatively called “Interlude”.

note: The original title for co 103510 was “Mornin’ Fast Train From Memphis To Harlem”. This session has been reported as having taped as little as 27 minutes and as much as two hours of music. In fact, the 40 minutes of music presented here is all that was committed to tape on that day.