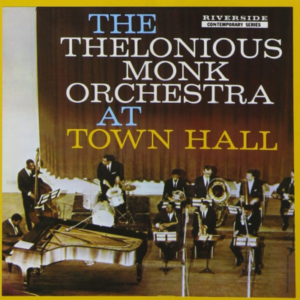 “An Evening with Thelonious Monk”

Unlike fellow modern pioneers Dizzy Gillespie and Charlie Parker, Thelonious Monk did not pay substantial dues in the big bands.  While Monk held the piano chair briefly in Gillespie’s orchestra, and had heard his “Round Midnight” introduced by Cootie Williams’ band, his music seemed resolutely small group oriented.

At the close of 1958, however, with his quartet disbanded and yet another licensing hassle temporarily keeping him out of New York City clubs, Monk embraced his advisors’ idea of presenting a concert featuring both a reorganized quartet and a larger ensemble.

Monk admittedly did not enjoy arranging, so finding the right collaborator to score the music became essential.  Composer, Julliard professor, occasional jazz pianist and Monk enthusiast Hall Overton proved to be the ideal choice.  In Overton’s loft space in Manhattan’s Flower District, the pair worked at two upright pianos, the composer teaching his music bar-by-bar to the arranger in extended sessions.

The celebrated photographer W. Eugene Smith, another tenant in the building, taped several of these encounters, which reveal Thelonious Monk’s idiosyncratic oversight of the orchestration process.  Once the melodic, harmonic, rhythmic and dynamic details had been absorbed to Monk’s satisfaction, Overton would write treatments for a ten-piece group of four brass, three saxophones and rhythm section that captured the richness and detail of Monk’s music.

Rouse gave signs of what would become his decade-long affinity for Monk’s music, Jones and Taylor laid down a sufficiently deep bottom to swing the band, Byrd handled the numerous trumpet solos with aplomb, and Woods and Adams also had opportunities to display their authority.  Perhaps most important, Overton’s arrangements showed an organic understanding of Monk’s sound and deep swing.

Monk, the big band and the crowd left deeply satisfied with the results of this bold experiment, but the critics in attendance were less impressed.  They complained of the ensemble scoring and Overton’s overly intellectual approach to the music, and felt that the numerous solos and stress on ensemble choruses inhibited the composer/pianist.  A planned tour for the orchestra was cancelled in the wake of these disappointing notices, and for a brief moment the experiment appeared destined to be remembered as a failure.

Fortunately, Riverside Records had taped the evening, and the subsequent LP led to a hasty reevaluation.

The success of Overton’s charts, the enthusiastic collective response of the big band, and the pianist’s own powerful solos were undeniable.  A second concert, with Bert, Woods, Rouse and Overton still aboard, would present further arrangements of Monk’s music at Lincoln Center’s Philharmonic Hall in 1963, by which time Thelonious Monk Orchestra at Town Hall had been recognized as a triumph.  Subsequent decades have seen its example inspire artists as diverse as Bill Holman and Misha Mengelberg to think big when interpreting Thelonious Monk’s music.