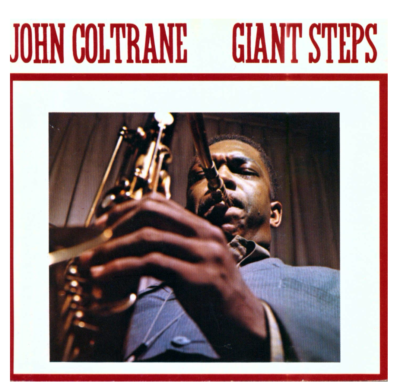 If John Coltrane had only recorded the Giant Steps album, he would still be well known today as a very original tenor-saxophonist and composer. Mostly recorded during May 4-5, 1959, the seven Coltrane originals that comprise Giant Steps both summed up the bebop legacy of the past 15 years and looked ahead to the next 15. The 33-year old musician, who had been virtually unknown four years earlier, was ready to claim his place as the leader of jazz.

A drug habit resulted in him being fired by Miles Davis but ‘Trane soon permanently rid himself of that addiction, leading to his musical growth during 1957-58 accelerating. 1957 found him spending a few months as a member of the Thelonious Monk Quartet and recording his first universally acclaimed gem, Blue Train.

By then his sound and style on tenor were completely original, not sounding at all like his historic predecessors Coleman Hawkins, Lester Young, and Ben Webster, or his early influence Dexter Gordon. Coltrane was instantly recognizable within two notes while at the same time developing his own fresh and adventurous way of improvising. Dubbed “sheets of sound” by journalist Ira Gitler, Coltrane thought in terms of clusters of notes rather than individual ones and his solos could excite or annoy listeners who were accustomed to hearing more relaxed and accessible players.

On Mar. 2 and April 22, 1959, Coltrane recorded the highly influential Kind Of Blue album with Miles Davis. Most significant of the five songs for the saxophonist was “So What,” a piece that only utilized two chords. Coltrane would use the same idea for his “Impressions” a few years later.

During May 4-5, just 12 days after the second part of Kind Of Blue was recorded, John Coltrane recorded most of Giant Steps, his debut album for the Atlantic label. Unlike on his many Prestige sessions, Coltrane wrote all seven compositions. That Mar. 26 he had a session with pianist Cedar Walton, bassist Paul Chambers and drummer Lex Humphries that included multiple versions of three of the songs. But he was not happy with the results and those performances were not released until decades later. For the actual Giant Steps album, Coltrane was joined by Chambers, pianist Tommy Flanagan, and drummer Art Taylor.

The set starts off with “Giant Steps,” a piece so complex that it can be thought of as the logical end of bebop and chordal improvisation. There are no less than 26 chords in each 16-bar chorus along with several key changes. Individual chords often fly by after just two beats, making this a challenging piece to master, particularly in 1959. After the record was released, “Giant Steps” took the place of the comparatively easy “Cherokee” as the test piece for young jazz musicians. Coltrane’s two solos sound effortless with a nonstop flow of creative ideas.

When Tommy Flanagan was given a copy of Coltrane’s original “Giant Steps” to practice, the pianist thought that it was a ballad. After all, the piece does have a rich melody that can sound memorable at a slow pace. When it was time to record “Giant Steps,” Flanagan was shocked when Coltrane counted it off at a rapid tempo. He did his best but gave up near the end of his solo, switching to just stating the chords until the saxophonist jumped back in. Flanagan would record his own excellent version years later, but at the time very few could have sounded credible playing “Giant Steps” without a thorough study of it at the correct tempo.

Ironically, while “Giant Steps” has been recorded a countless number of times since the original version, Coltrane never recorded it again and does not seem to have ever played it with his own working group; at least no live version of Giat Steps from him has ever surfaced.

Following “Giant Steps,” “Cousin Mary” (dedicated to Trane’s beloved cousin Mary Lyerly Alexander) is a straight ahead cooking blues with a couple of altered chords and a catchy theme. The composer simply plays the blues in his fashion, Flanagan takes a fine solo (sounding much more comfortable than he did on “Giant Steps”), and Chambers has a nice spot. Coltrane would play “Cousin Mary” on an occasional basis with his quartet during 1961-63.

Countdown” is brief but quite explosive. Coltrane starts off improvising with fury over Taylor’s relatively calm drums before being joined by the full rhythm section. Although it is only apparent near its conclusion where the “Countdown” melody shows a definite similarity to the standard “Tune Up,” Coltrane was playing over a modernized version of the chord changes of “Tune Up.”  Only lasting around 2 ½ minutes, this recording must have scared many of his fellow saxophonists at the time.

“Spiral” has more original chord changes and a downward bass pattern that makes the song sound both challenging and somewhat accessible. As with “Giant Steps” and “Countdown,” Coltrane never recorded this song again, possibly feeling hemmed in by the structure. “Syeeda’s Song Flute” also made its only appearance in Coltrane’s discography on Giant Steps. Named for his adopted daughter, “Syeeda’s Song Flute” has a distinctive theme and an original set of chord changes that inspires a tenor solo that is both somewhat melodic and energetic. It also has Chambers’ most extensive solo of the album. It deserved to become better-known but was overshadowed by the title cut and the two songs that followed.

“Naima,” which was named after Coltrane’s first wife, was recorded at both the Tommy Flanagan and Cedar Walton sessions but the saxophonist was dissatisfied with those versions. Instead the recording on the Giant Steps album is from Dec. 2, 1959 with Wynton Kelly, Paul Chambers, and Jimmy Cobb. The haunting ballad remained in Coltrane’s repertoire throughout the remainder of his life and at least 18 of his versions (mostly taken from live concerts) have been released. It has a melody and a mood that sticks in one’s mind long after the recording is finished.

Wrapping up Giant Steps is “Mr. P.C.” which was named after Paul Chambers. The uptempo minor blues, which was played regularly by Coltrane with his quartet during 1961-63, has a blazing tenor solo and is the perfect close for this classic album.

While it is tempting to think of Kind Of Blue as John Coltrane’s finale with the Miles Davis group and Giant Steps as the beginning of his solo career, it did not quite work out that way. Coltrane was still a sideman with Davis throughout 1959 even as he led other albums for Atlantic and consolidated his position as the most important saxophonist in modern jazz. He was reluctantly persuaded to go on a European tour with Davis in the spring of 1960 but, when that concluded in April, he was finally able to form his own quartet and play the music that he was creating in his mind.

The “Coltrane Changes” as they are known, are the foundation for several of Coltrane’s tunes such as Countdown and 26-2. Giant Steps cycles through three different key centers separated by major 3rds. Altogether the roots of these chords make up an augmented triad. In its original key, the three key centers are B major, Eb major, and G major.