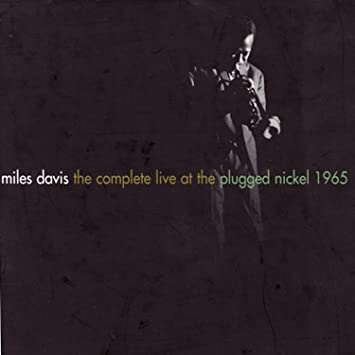 By Bob Blumenthal
Miles Davis was still playing the material he became identified with when John Coltrane and Garland were in the band. To a large extent, he would continue to do so until his electric makeover in 1968, even after recording a score of excellent new originals in the studio. This decision reflected a continuing fondness for the likes of Autumn Leaves and If I Were A Bell, a conviction that they could be molded to more abstract ends, and a realization that the audience expected at least this much familiarity in a Davis performance. Still, new music was needed to fit the band’s new ideas.

The need was met when Wayne Shorter, who Coltrane had suggested as his replacement over four years earlier, finally joined the quintet in the late summer of 1964. By this point, Shorter was 31 years old and had been a featured soloist and composer with Art Blakey’s Jazz Messengers for five years. His tenor playing had been heralded for its power and originality, combining in an unmistakably personal synthesis elements of both Coltrane (the keening tone and complex arpeggiated phrases) and Rollins (thematic development, frequent use of the lower register and broad humor); and his writing was filled with melodic and structural wrinkles.

Shorter also possessed what his future Weather Report partner Josef Zawinul referred to as the “new thinking.” In April of 1964, he had made the first of several albums as a leader for Blue Note, Night Dreamer, and spoke in the liner notes of “the new blues coming, the new period of enlightenment.” Few musicians were in such possession of what might be termed late”60s consciousness so early.

On the September ’64 concert that produced the album Miles In Berlin, Shorter proved to be exactly the player Davis had been looking for. He was not as deeply into the avant-garde as Sam Rivers, who had worked briefly with Davis after George Coleman left the band (and who was present on a Tokyo concert recording from July), although Shorter pushed the envelope constantly in his solos. What he had that his immediate predecessors lacked was a deep, unshakeable lyricism and a growing tendency to make more out of fewer notes that suggested no other player so much as Davis himself.

With Shorter aboard, the quintet’s approach to rhythm and tempo exploded. Meters would frequently change and instruments would drop in and out of support, leaving the forms bent but unbroken. Hancock grew more circumspect in his comping, laying out for long stretches behind the trumpet and tenor while Williams juggled the beat with ferocious glee and Carter used his exceptional harmonic ear to redefine the limits of the walking bass. Ballads might turn into flag-wavers, flag-wavers into head-shaking groovers. The second great Miles Davis quintet was finally complete.

Even so, the band appeared to take divergent paths in the recording studio and on the job. With Shorter turning out numerous originals and each member of the rhythm section also making important contributions, Davis was able to launch a series of albums featuring innovative new compositions, the first of which, E.S.P., was taped in January 1965. In person, the repertoire remained much as it had been, although the warhorses were now pulled like taffy into unprecedented new shapes.

Listeners who formed their impressions through recordings (especially in the U.S., where the Berlin concert was not issued until 1983) had a totally different sense of the new quintet than those who were fortunate enough to hear the band in person. For this reason, the two-record Live At The Plugged Nickel, recorded during a December 1965 engagement at the Chicago nightclub, caused an incredible stir upon release in Japan (in 1976) and then in the U.S. (in 1982). Here was the quintet in full flight, showing even greater daring with numbers from the old Davis book than it had with the originals on the contemporaneous E.S.P. and Miles Smiles (the latter recorded in October 1966). A third album, Cookin’ At The Plugged Nickel, followed in 1987, though that release still brought less than half of the music recorded on the nights of December 22 and 23, 1965 into circulation.

What we have here is everything played on those evenings, three sets from the 22nd and four from the 23rd. The tune choices are familiar yet radically different than original studio and earlier live versions. Even successive performances of the same titles show disparate approaches and reveal as much as any single set of recordings about this magical unit. At root, they also remind us how, through nonverbal cues and an uncompromising example, by knowing his own mind yet letting his talented charges have their head, Miles Davis once again proved to be as brilliant as any leader in jazz. –Bob Blumenthal, liner note excerpts Mosaic Records: Miles Davis Complete Plugged Nickel Sessions (10 LPs)

If I Were A Bell

If I Were A Bell, the track that opened Cookin’ At The Plugged Nickel, was the first tune played on the first night of recording. After a drum roll that momentarily recalls Art Blakey at Birdland, Davis counts off the tempo at a pace that is even quicker than the 1964 Tokyo concert recording with Sam Rivers. Davis, tightly muted and miked, lets Williams generate much of the momentum early on (which the drummer handles through ideas developed melodically over his cymbals as well as his snares – a major step beyond the Philly Joe Jones/Jimmy Cobb groove of earlier Davis bands).

The chorus form is quickly abandoned for an ever-more-abstract tag, and now the trumpet clearly leads the way, building extended episodes from pet licks or sometimes more elemental tones and sounds. “Stroll and toll” summarizes the rhythm section’s response, with Carter and Williams fused and Hancock inserting occasional comments.

Shorter sneaks in when Davis concludes, as the tempo momentarily cools before reigniting behind a stunning tenor solo. More interested in the chorus structure than Davis, Shorter plays through it several times, never quite deserting the changes yet superimposing ideas that turn them to white noise in spots and reach a more personal, rarefied plane. Hancock’s more active comping suggests a rhythmic figure at one point that Shorter grabs and develops.

The piano solo is thematic at first, yet quickly becomes as willing to explore the feel of a trill or other keyboard gesture as melodic figures. Like the rest of the band, Hancock heard content in multiple musical directions. That he and the others could pursue their notions so freely was due in large part to Carter, whose distance from predictability on this performance is indicative of his essential yet low-profile contribution. Tempo decelerates through the climax of the piano solo, which allows Davis to return closer to the original 1956 studio pace. Williams’s shuffle brushes on the coda are a final treat. – Bob Blumenthal 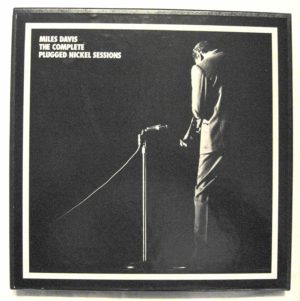 Selections marked with an asterisk are issued in their complete form for the first time in this collection.

(B) December 22, set two:
My Funny Valentine
Four *
When I Fall In Love
Agitation
‘Round About Midnight 25AP291
Milestones *
The Theme

(C) December 22, set three:
All Of You
Oleo
I Fall In Love Too Easily
No Blues *
I Thought About You
The Theme

All titles in this collection were previously issued on SRCS 5766-5272, a 7-CD boxed set. However, those selections marked with an asterisk appeared in edited form.